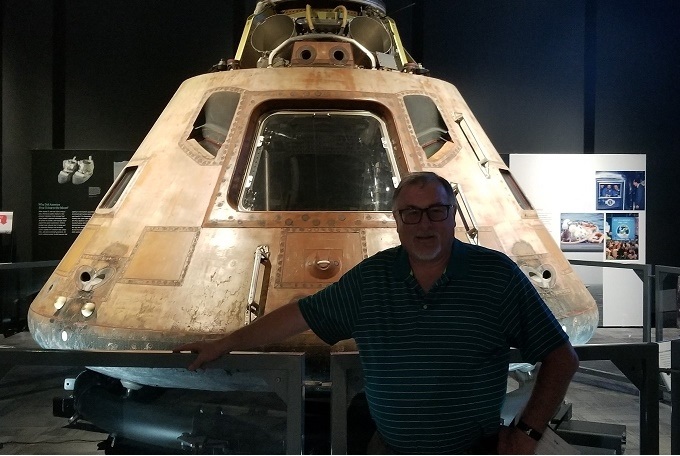 "One small step for man, one giant leap for mankind" Neil Armstrong

Fifty years ago on July 20, 1969, Neil Armstrong, Buzz Aldrin and Michael Collins achieved the ultimate goal of President Kennedy's challenge of putting a man on the moon by the end of the decade. A mission that united our country in the pursuit of a task that only seemed achievable in the science fiction of Jules Verne. A feat that spawned the technological revolution we are enjoying today. Case in point, I am writing this post on a phone that has more computing power than the entire Apollo project.

I believe the small step by Neil Armstrong off the Eagle's landing pad onto the moon's surface on the Sea of Tranquility was one of those moments in history where I can remember every detail of "where I was" when I heard Neil Armstrong utter, "One small step for man, one giant leap for mankind".

My story, I was a twelve year old Boy Scout at Camp Owasippe in Michigan. One of the Scout leaders, Mr. Homan, brought a transistor radio (and lots of batteries) and we spent the evening huddled around the radio listening to the broadcast as the Eagle descended to the lunar surface. We cheered when we heard "the Eagle has landed". About that same time, we were scheduled for an evening swim at the Wolverine South swimming pool. It was a very hot evening and it was a tough decision, cool off in the pool or listen to history being made. We reluctantly trudged off to swim knowing that soon man would be walking on the moon. Mr. Homan, saved the moment when he brought the radio to the pool. There were over twenty Scouts in the water, but you could hear a pin drop as we stood still in the water and heard Armstrong's historic transmission from Tranquility. We cheered louder than ever.

As a footnote to my experience, in 1994 I was a Boy Scout leader with my oldest son Sean. We happened to be camping at Owasippe with his Troop the week of the twenty-fifth anniversary of the moon walk. Unfortunately, the Wolverine South swimming pool, where I experienced the moon walk twenty-five years earlier, had fallen to dis-repair and was filled in with sand. On the night of the anniversary I took Sean and several other scouts to the now filled in pool. We stood where I swam twenty-five years earlier, looking at the moon as I told them the story of man's greatest achievement. What great memories!

The picture that accompanies this post was taken at the Boeing Museum of Flight in Seattle, WA on June 13, 2019 while I was at the CONNECT2019 conference. The Apollo 11 command module is the only piece of equipment that exists from the lunar landing.

What was your memory of Armstrong and Aldrin's historic moon walk? #ClarkFS #Apollo11